Winter Around The Corner A late fall sun slowly crept over the eastern horizon. The thermometer reported eight degrees this morning as I made my way from the bedroom to the woodstove that provides most of the heat for our cabin. With some crumpled up newspaper, a couple sticks of cured split oak wood, and the magic of some commercial fire starter, the old stove sputtered to life.

Looking out the cabin window to a newly piled stack of firewood, now a little snow covered, I thought about my days on the farm as a kid. This time of the year and on into the “just around the corner” winter season, we began to relax a bit. The haymows in the barn were stacked high with alfalfa, clover, and bromegrass hay. The corn crib was filled to running over with yellow cob corn. Our wooden stave silo was filled with corn silage, and the oat bins in the granary sagged from the seasons annual threshing. The woodpile, many times larger than the one pictured here, stood ready for the long, cold winter ahead.

As I looked out the window at a chilly landscape, I thought about how much the winter season drove everything that we did on the farm. All of the work from spring to fall centered on preparations for winter. For providing sufficient shelter and feed for the farm animals. And making sure the family had shelter and food to last until spring.

THE OLD TIMER SAYS: As we finished preparing for winter, we looked forward to slowing down a bit.

"Water, Woods & The Pioneer Life: Three Wisconsin Authors on Process & Publication" 702WI teams up with Wisconsin Historical Society Press to present a panel discussion with three Wisconsin authors: Jerry Apps, Kathleen Ernst & Marnie Mamminga. A book signing will follow. Tickets are $15 for the event only or $20 for the event and a copy of Telling Your Story by Jerry Apps. Purchase tickets online, www.702wi.com.

• Simple Things: Lessons From the Family Farm
The importance of the simple things
.
• Once a Professor
Teaching at a major university during the turbulent 60s

Posted by Jerry Apps at 3:43 PM No comments: 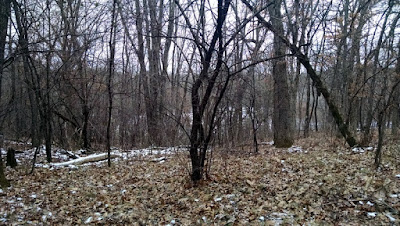 Opening day of the deer gun season in Wisconsin. A sacred day for thousands of hunters who would not think of attending a wedding, a funeral, an anniversary or a birthday party on this day.

I am at my trusty deer stand, at the crack of dawn. Except dawn hasn’t cracked as it is cloudy, dark, and cold. And quiet. So quiet. No bird sound. No wind rustling the tops of the naked oaks. A dusting of snow covers the landscape and the frozen, snow-covered pond that is to my left. I am sitting near a much-used deer trail. It includes fresh tracks, made last night? Promising. Surely a deer will wander by.

A half hour goes by. Nothing. No squirrels. No bluejays. No crows And no deer. I pour a cup of coffee from my thermos. Inevitably a deer will wander by when I do not have my rifle in hand. That’s when they usually show up. Not this time. Still nothing.

An hour goes by. Nothing. I pour more coffee. And then, strange as it may sound, I begin enjoying the nothingness of the morning. No phone ringing. No radio blaring. No loud talking. I can’t remember when I have experienced such absolute quiet, such complete “nothing happening” time. I sit back and relax. Enjoying the morning. Long ago, I concluded that deer hunting is so much more than bagging a deer. This is one more of those times.

THE OLD TIMER SAYS: Sometimes nothing can be everything.


Featured Books of the Week

Cold as Thunder
A look into a challenging future when climate change is denied and one political party rules.

Blue Shadows Farm
A Family fights to keep control of their farmland with mounting pressures to sell.

All copies of these novels are signed by the author and available for sale at the Wild Rose Library as a fundraiser for the Friend of the Library. 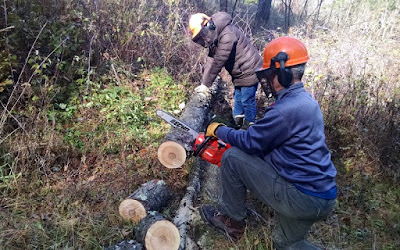 Last Saturday was our annual “wood making” day at Roshara. We bring as many volunteers from the family who are available, sometimes the number reaches a dozen or so when kids and grandkids are there. But Alas, the grandkids had seen fit to be elsewhere this year. So it was back to the long-time reliables. My daughter, Sue and son-in-law, Paul worked on Saturday along with brother, Don who lent a helping hand. My son, Steve and daughter-in-law Natasha worked on Sunday.

A note on the weather. Saturday was a beautiful, sunny day. No wind and temperatures hanging in the high forties. Sunday was a miserable, cold, all day rain. But weather or not, wood making went on. Earlier I had spotted two trees that were close to the trail. One dead, and one nearly so.

With Paul on the chainsaw and Sue helping with the cant hook, by noon we had a pile of blocks ready for splitting. I was in charge of hauling, an easy task. I drove a four-wheel drive all-terrain vehicle with a dump box. When I was a kid we toted limbs and tree trunks to the farmstead from the oak woods with our trusty team of horses and a steel-wheeled wagon.

For years we split the blocks with a splitting maul, with Steve becoming an expert at doing it. But now, as we all are older, I purchased an electric log splitter that does the job twice as fast with a fourth of the effort.

The splitting continued on Sunday, in the rain (the splitter was in a shed). Sue on Saturday and Natasha on Sunday (in the rain) created a neat woodpile outside the woodshed, where it will dry until next summer when we will carry it into the woodshed.

With sore muscles all around, one more annual farm task is completed. Aside from the hard work, there is a certain beauty to the work (I never thought I would say that). The smell of freshly cut trees, and the artful pile of split blocks. Plus of course a great feeling of accomplishment.

THE OLD TIMER SAYS: There is much more to making wood than cutting down a tree and splitting the blocks.

Jerry’s latest books are:
• Simple Things: Lessons From the Family Farm
• Once a Professor
• Cold As Thunder (A Novel)

The library has several of Jerry’s signed books for sale including several of Jerry’s nonfiction books:
• Every Farm Tells a Story (Revised edition)
• Living a County Year (Revised edition)
• One Room Country Schools
• Never Curse the Rain
• Whispers and Shadows
• The Quiet Season
• Old Farm Country Cookbook,
• Wisconsin Agriculture: A History
• Roshara Journal (with photos by Steve Apps)
• Old Farm: A History
• Telling Your Story—a guidebook for those who want to write their own stories.
• Horse Drawn Days

Posted by Jerry Apps at 8:57 AM No comments: 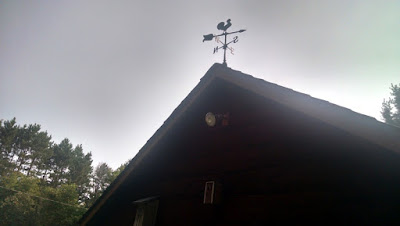 When I was a kid, there was no such thing as a TV weather report with radar images showing one exactly where a storm was located, and even suggesting how much rain or snow could be expected. Truth be known, there was no television in our neck of the woods until the early 1950s.

So how did we predict the weather? Farmers live by the weather, especially during the harvesting season, but also to a considerable extent throughout the year. For instance, you didn’t cut down 20 acres of alfalfa, if it rained the following day.

Pa was good at weather forecasting. He depended on two things, cloud formations and wind direction. We had a weather vane on top of our barn. First thing in the morning, Pa looked for the wind direction. If the wind was in the east, and the sky was red as blood, rain was on the way. The old saying, “Red sky in the morning, sailors take warning” had much truth connected to it.

If the wind came from the west or the southwest, and there were but a few fluffy clouds floating along, we were in store for some clear weather. If it happened to be one of those rare days when we left farm work behind and went fishing, Pa would say, “Wind in the west fish bite best.” For a south wind, he would say, “Wind from the south blows the worm right in the fish’s mouth.”

Pa was generally right about what kind of weather was on the way. He used his weather wisdom his whole life.


THE OLD TIMER SAYS: In the olden days, weather forecasting was an art. I suspect it still is.

Purchase Jerry’s signed DVDs and books from the Library in Wild Rose, Wisconsin (a fundraiser for them):
Patterson Memorial Library
500 Division Street
Wild Rose, WI 54984
barnard@wildroselibrary.org
www.wildroselibrary.org
Phone: 920-622-3835
DVDs: His latest Public TV show, One-Room Country School is now available. It’s based on his book, One-Room Country Schools (also available). Emmy Winner, A Farm Winter with Jerry Apps (based on The Quiet Season book.)
Jerry Apps a Farm Story (based on Rural Wit and Wisdom and Old Farm books.)
The Land with Jerry Apps, (based on the book Whispers and Shadows,)
Never Curse the Rain, (based on his book with the same title)
The library has several of Jerry’s signed books for sale including Jerry’s newest nonfiction books, Once a Professor, Every Farm Tells a Story, Living a County Year (reprints), One-Room Country Schools, Never Curse the Rain and Old Farm Country Cookbook, and his novel, The Great Sand Fracas of Ames County. Also Wisconsin Agriculture: A History, Roshara Journal (with photos by Steve Apps) and Telling Your Story—a guidebook for those who want to write their own stories.
Contact the library for prices and special package deals.