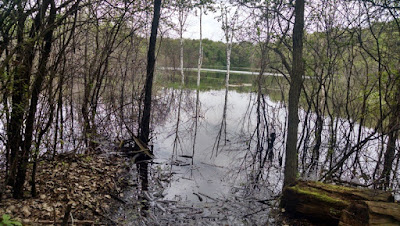 Back in the 1940s, the ponds on our present-day farm were small lakes, teaming with wildlife, fish, and lots of ducks and geese during the spring and fall migrations. Some 25 years later (1966), when we bought the place, the ponds had all but dried up. Even in the spring, with the snow melt, the ponds gained little water and by mid-summer had become wet marshes. Trees began growing where water had been.

In 1993, the ponds began filling with water and continued so into the early 2000s. We canoed on the pond, exploring its many nooks and crannies. A pair of sandhill cranes nested on the northwest shore of the pond, a pair of wood ducks raised their brood on the south shore, a pair of mallards on the east shore. Deer came down to the water to drink, so did raccoons, and songbirds by the dozens gathered there.

Then the water began disappearing, each year a little more, until 2017 the ponds looked like they did in the middle 1960s. Where once there was water, now grew birch and willow trees, some thirty and more feet tall.

In 2018, it began raining. An inch of rain one day, two inches another day, and even more than that on some days in late summer. The pond began inching higher. The snow was deep during the winter of 2018-2019, and more rains fell in the spring. The ponds rose rapidly. Birch trees stood in four feet of water, all dead. Once more we canoed on what are now small lakes.

FOR MORE ABOUT OUR FARM’S HISTORY, PICK UP A COPY OF Roshara Journal:"Chronicling Four Seasons, Fifty Years, and 120 Acres." Wisconsin Historical Society Press, 2016.
Purchase from your local bookstore, or buy them from the Friends of the Patterson Memorial Library in Wild Rose—a fundraiser for them. Phone: 920-622-3835 for prices and ordering.
Patterson Memorial Library
500 Division Street
Wild Rose, WI 54984
barnard@wildroselibrary.
www.wildroselibrary.org